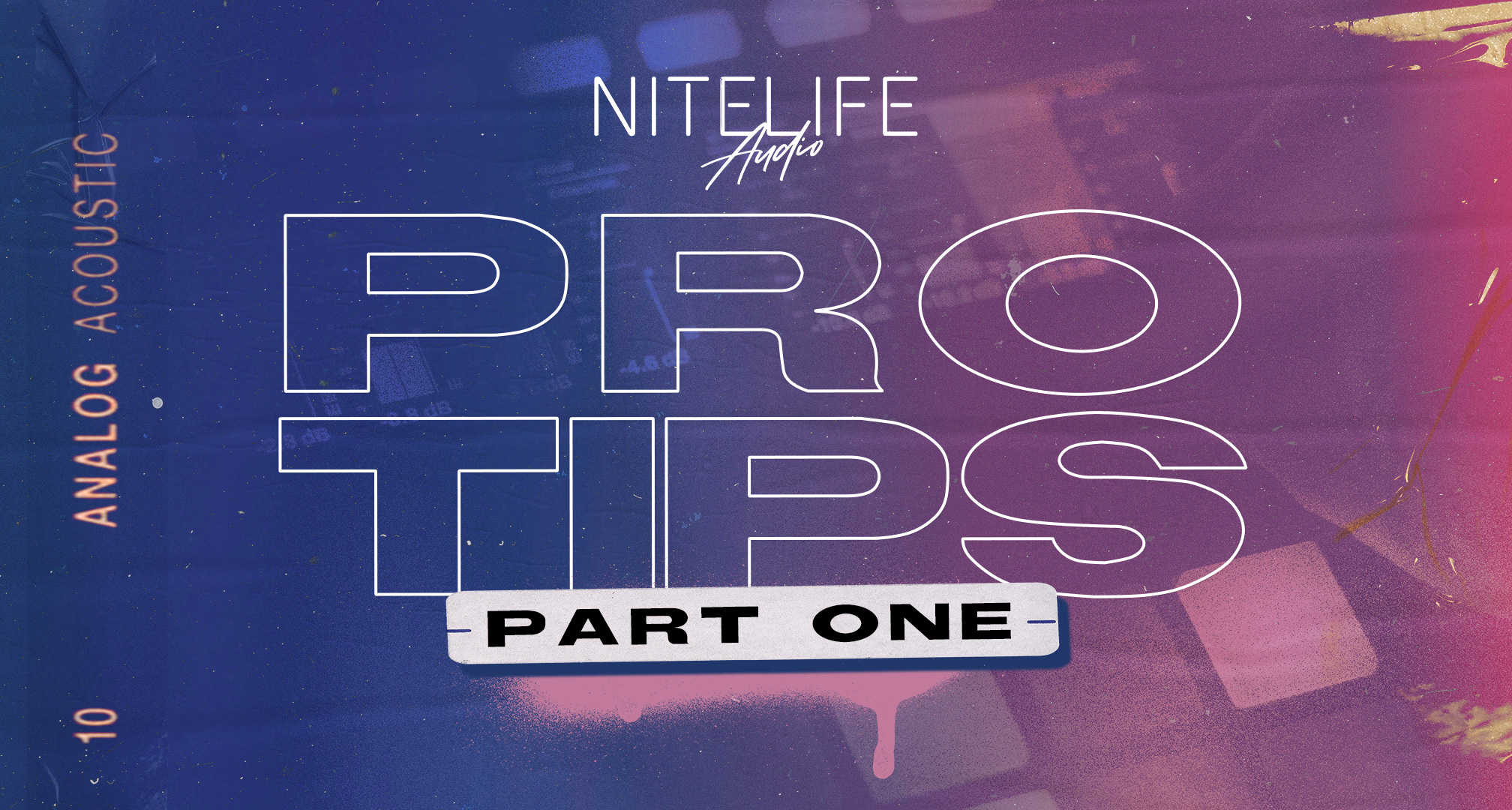 These ‘PROTIPS’ have appeared across our socials over the last few months. We thought it might be helpful to have them collated into a single digestible article – so here’s part one, which consists of the first five. We’ll be continuing to release these regularly, providing tips, tricks, and valuable advice across a range of production, workflow, creative, mindset, and mix-related questions.

Whilst hi-hats add a lot of energy and groove, if proper consideration isn’t given to de-essing and minimising resonant frequencies, they will end up sounding overly harsh when your record is played at high volumes and/or mastered. You can solve this problem in various ways:

2. Play with the envelope of your hi-hats to create a tighter, more precise sound. Sometimes a transient shaper can be useful here, too. You don’t need as ‘much’ hi-hat as you think you do, especially on club systems.

3. Use a de-esser plugin, or preferably a specialist tool like Oeksound’s Soothe to control & dynamically suppress harsh, fatiguing resonances. Your mastering engineer, and your ears, will thank you.

It’s a problem that’s been around virtually as long as we’ve been mixing audio: how to get that coherent, pleasant-sounding low-end with a kick and bass that ‘sit’ together nicely. Here’s our advice:

1. It might sound obvious, but choosing the right sounds to begin with is going to make your life a lot easier. If you have a kick drum that’s got the sub-heavy, low-end characteristics of an 808, then you’re going to struggle to get a coherent, pleasant balance with almost any other kind of bass sound that plays at the same time. You can navigate this by a) not having a bassline and making the kick even heavier (common in a lot of techno productions) or b) programming/playing the bass to be in spaces where the kick isn’t. However, keep in kind that offbeat basslines which are too busy or too sparse may not best suit the genre you’re making.

2. If you’re happy that you’ve got the best possible sounds, the next step is to tidy up what you have. Be diligent with your EQ, being sure to make a low-cut as high as you can go on every instrument and then on every bus channel too. It’s not uncommon in specific genres to go as high as 30/40/50hz with the kick drum to leave room for the bass. You should also remove any ‘flabbiness’ from both the kick and bass using the envelopes or a transient shaper to tighten up the notes and create space. Using something like a Subpac can help you to measure the interaction between the kick and bass, and also alert you to any other instruments which have rumbles that your ears can’t pick up.

3. Lastly, some good old-fashioned classic side-chaining may actually be all you need. We’ve placed it last as a recommendation because it shouldn’t take precedence over choosing the right sounds and tidying up your low-end elements – you should be doing those things anyway. Still, it’s a helpful method which not only can improve your mixes but also works as a stylistic sound design tool that you can apply to vocals, pads, textures or anything else to add a dimension of rhythm and movement. Productions by artists like Kaytranada and Disclosure are great examples of this.

Making records as an electronic artist or dance music producer is very often a solo pursuit, and after the initial burst of creativity and ‘fun’, we can spend many hours ‘in a loop’ feeling frustrated, doubting ourselves, and procrastinating over the arrangement and anything that we find tedious. Collaborating with somebody else can really help you in this situation because the other person is very likely to approach the music or stems that you send them in a refreshed way. They won’t be fatigued by repetition and they will be able to hear things that you’ve missed – both good and bad.

Finishing music is absolutely crucial but it’s also one of the processes that requires the most discipline. Try reaching out to someone you’re friends with, or on the same label, or perhaps have worked with before, and propose that you swap stems and finish each other’s ideas. This way, if all goes well, you’ll end up with 2 finished tracks which you can send to labels and you will have minimised the tedious bits that usually lead to time being wasted.

There are sure to be times when you’re not feeling quite as creative. Maybe you’re tired, or perhaps you don’t have the time on a particular day to get into making a full track. On these occasions, it’s important to remember that no session in the studio ever needs to be wasted. If, for instance, you’ve only got 2 hours to spare, you could use it to export stems and loops from existing projects, organise your sample folders, and save channel strips & synth patches. This makes sense on several levels – it’s likely that you’ve already spent a reasonable amount of time getting those sounds exactly how you want them, so why not call upon them again when you’re making that next record in the same style? They should slot in nicely with whatever you’re working on in terms of tone and processing, and reusing them also has the added benefit of helping to establish your ‘sound’ through repetition of certain signature elements or motifs. You can effectively think of this as your own ‘in-house’ sample library, which you can chop, flip and resample. If you’re diligent about it, it can really pay dividends in the future.

Another recommendation is to move your most inspiring samples into a dedicated folder so that when you need something with a bit of magic, you can simply heato the ‘inspiration’ folder to find it.

Finally, Save precious hard drive space (and your sanity) by deleting sounds you’ve had for years, but never used. We all have those sample graveyards that (even with the best of intentions) never get visited. It’s highly unlikely you’ll miss them if you delete them, and it’ll make finding those hidden gems that bit easier. Just because there’s an endless palette of drum sounds out in the world, it doesn’t mean that you should waste your time trying to acquire them all.

It might initially seem counterintuitive, but too many options can be stifling. It’s what’s commonly known as ‘analysis paralysis’. Before we had the computer processing power, choices and (almost endless) distractions we do today, the specific ways in which most hardware and software worked arguably helped us to focus far better. Limitations included: available memory, sampling time, mixing desk channels or just a general lack of equipment. Very often, there might only be single compressor / delay / reverb along with possibly 1 hardware synth or some type, a drum machine, and perhaps an 8-track recorder, in a smaller home or project studio. As a result, producers and musicians had to find creative workarounds to bring their ideas to life.

You can apply these principles to your own music by setting boundaries. Why not try and make a record with only 5 elements, but make those elements evolve by continuously automating them to keep things interesting? Or if you usually use live instruments like Rhodes, guitars, and bass, try writing a track with entirely synthesised elements. These self-imposed restrictions should speed up your decision making.

Another fun approach, if you’re able to, is to use a standalone groovebox like an MPC or Maschine to construct a track. In the heyday of house and hip hop, many beats would have been composed entirely on an MPC or SP1200, and the ‘on-the-fly’ performance recorded to a 4-track or DAT or tape machine, including breakdowns, effects, and main sections. You could then choose the best parts and edit a 12 minute recording down to 6 or 7 minutes. Many producers still employ this method today.