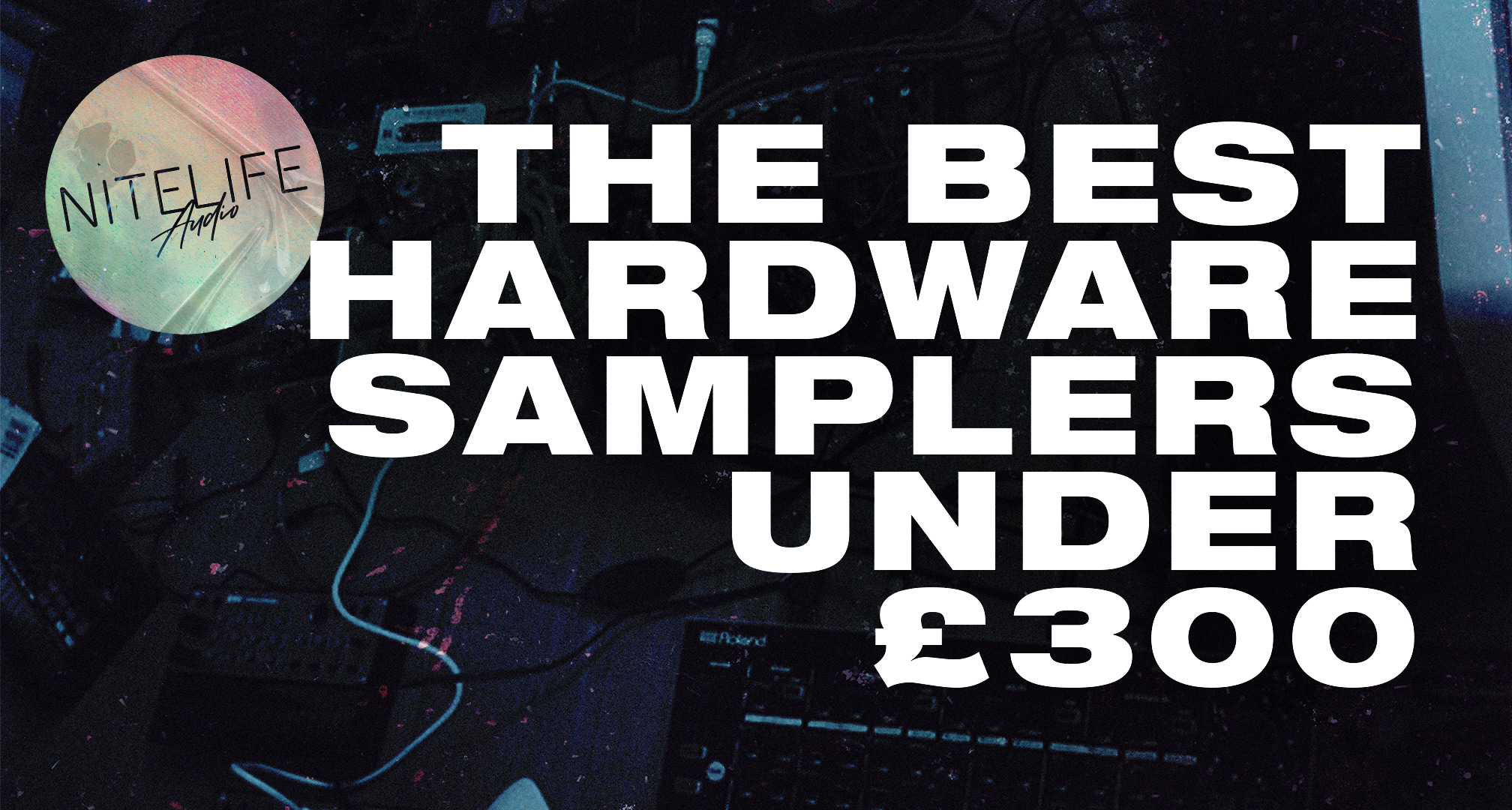 Digital sampling using your DAW is pretty standard these days but it was only a few years ago that every studio in the land had at least one or two hardware samplers in their equipment rack. Now though, the sampling capabilities offered by DAWs are only limited by their user’s imaginations (and copyright laws of course), so why would anyone want to buy an external sampling box with the inevitable compromises that small bits of gear bring?

The answer only becomes clear once you physically try out a piece of hardware. There is still nothing that compares to jamming on a step sequencer, away from a computer screen, with a couple of encoders to tweak the filter and effects. It’s still one of the very best ways to come up with fresh ideas and its way more fun than fiddling with your trackpad or mouse. Working with a dedicated piece of hardware allows you to move away from visually fixating on the screen and the arrangement in front of you, and instead can facilitate the kind of intuitive, creative workflow that all producers desire. Jamming on a dedicated box creates a direct connection to the dance floor experience because you can ‘play’ it and move to the music, rather than operate it, which brings a physicality to the task that is hard to capture when sitting at a laptop. Dedicated external bits of kit also allow electronic producers to perform their work live, to improvise and create on the fly.

With this in mind, we present the first of our sampler reviews, looking at three of the best samplers on the market for under €300. Here are the contenders:

First up is the popular addition to the expanding Korg Volca family, the Korg Volca Sample, which is currently retailing for around £140. The Volca Sample is a small (it’s the size of a small book) but well-specced sample player with emphasis on live performance. It has no inbuilt sampling ability of its own, instead, you fill it with your own samples via either an iPhone or iPad. As with all the machines we’re looking at, the aim is to provide the user with as much tweakability from the front panel with minimum menu delving, to facilitate workflow. So you get a powerful 16 step sequencer, a bunch of tiny encoders to adjust various parameters and a basic ‘calculator’ LED screen to show parameter levels.

There are lots of decent sound manipulation possibilities, with accessible parameters for each of the Volca’s ten sample slots. You can instantly tweak the sample start point, playback speed, pitch envelope, level, pan, attack and decay, and samples can also be looped and reversed. This means that you can very quickly warp a sample beyond all recognition and opens up all sorts of creative avenues.

In terms of effects, you get a single perfectly usable reverb – but these kinds of limitations are always a bad thing. In addition to the step programmer, squashy little pads and diminutive pots, there are two larger ‘analogue isolators’ for bass and treble, which provide an instant EQ boost or cut, and which are the only analogue part of the otherwise entirely digital Volca. Best of all in terms of creativity is that just like on their classic Electribe range, you can easily slip into motion sequence mode and record all your tweaks to the sequencer.The sample rate is 32kHz / 16 bit and the output – a  single 3.5 mm stereo mini-jack – is a little noisy, which all adds up to a pleasingly slightly crusty sound.

Build quality is slight, but sturdy enough for live work. The Volca Sample can run on either six AA batteries or with an (un-supplied) mains adaptor. Samples are loaded in via an iPad or iPhone but of all the machines we’re looking at here, the Volca has the smallest memory with only 4MB. This, along with the fact that step sequencing doesn’t exactly lend itself to melodic composition, may mean that the Volca may be best suited to drum programming and abstract non-musical elements / FX.

Obviously, at this price point, there are going to be compromises – the Volca comes with a tinny inbuilt speaker, but it doesn’t really do the machine justice. In terms of connectivity, it only comes with a MIDI in, no out or through which would have been useful. Likewise, a stereo 1/4 jack output would have been more desirable than the 3.5mm stereo out. Some may find the 4MB of sample memory limiting but this misses the point of a machine like this, which is all about instant performance, improvisation and the joy of creating. With the Volca Sample, Korg has managed to scale down a substantial amount of functions into a tiny, effective and fun package, with an impressive amount of audio manipulation and mangling possibilities.

Retailing at around £160 the Akai MPX16 is described by Akai as a ‘compact sampling powerhouse’. It’s a great looking bit of kit, with 16 brightly coloured illuminated pads dominating the front panel. Samples are loaded via an SD card and you can load up to 48MB of your favourite samples at a time. The MPX16 will only play WAV files, but comes with drop and drag conversion software. You can also record samples via the stereo input or through the onboard mic.

In terms of connectivity, the MPX16 connects via USB, has both MIDI in and out, and is powered by either USB or mains – and the mains adaptor is supplied too – meaning you can use it independently of a computer. It’s also nice to see full sized 1/4 inch jacks on the stereo ins and outs too, and there’s also a headphone socket. Regarding the MPX16’s MIDI implementation, unfortunately, the encoders don’t send MIDI CCs so you can’t record live knob tweaks to your external sequencer.

When it comes to the all-important editing and mangling of your sounds, the MPX16 has four encoders on the front panel controls with a push-button matrix for selecting either tuning, pad groups, envelope control, panning, volume and of course filter cut off, resonance and envelope amount. Having four available knobs to tweak four available parameters means the MPX16 is particularly good for live jamming and improvisation.

Maximum polyphony is 64 voices; you can loop your samples and the MPX16 also features non-destructive editing, so you can chop up a loop into little pieces, keeping some parts and discarding others with ease. Akai samplers were always highly praised for their filters, and the MPX16 comes with resonant 24dB low pass filters on each of the 16 pads. There’s also a reverb that you can adjust for each individual sample. Sample tweaking is easy and accessible but if you do need to delve into the menu, the MPX16’s screen is a backlit LCD display rather than the ‘calculator’ screens that are prevalent at this price point.

The MPX16 also comes with a built-in stereo microphone for field recordings. This is a nice addition, but as ever with onboard mics, the one time that it might be really handy is if you’re out and about whereupon the mic’s sensitivity to physical movement and vibrations will be picked up and included in your recording.

The build quality feels durable and the MPX16 integrates with ease with DAWs. Drawbacks, however, would have to include the slow sample loading time, which might be a problem for live performers. Overall, it’s a great-looking little box, very well suited for live performance and jamming. Plenty of onboard tweakability and with those Akai filters, you can squelch up your sounds with ease.

Costing around £180, the Maschine Mikro is the priciest sampler we looked at. NI call it a ‘compact groove production studio’. It has substantially more functions than either the Volca or the MPX16, but can’t be used independently of your computer. What you get for your money is a cool looking little box with 16 enticing multicoloured lighted pads, a single encoder, lots of buttons and a decent backlit LCD screen. Best of all, it comes bundled with Maschine software and 6GB quality sounds, including 7000 one-shots, 400 loops, 300 drum kits and 388 sampled instruments. The Maschine software can run either under a DAW host or as a standalone, but you always need to use it in conjunction with a computer. An especially nice bonus is that the Mikro can host third-party plug-ins, which really opens up its potential.

Again, it’s a box that has been designed to withstand the rigours of live use and feels solid and sturdy. The number of onscreen buttons speeds up workflow and generally, the Mikro is intuitive and easy to use. There are no MIDI ports, all connections are through USB. Although the largest of the three samplers we’ve looked at, it’s still highly portable, is light and will slip into your laptop bag with ease.

The Mikro can claim to be a fully-fledged sampler rather than a sample player. It has 32 note polyphony and can sample at up to 24 bit 192kHz. However, if you prefer a more gritty approach, it can easily emulate older samplers like the MPC60 or SP1200. Unlike the other two boxes reviewed, it can take Rex files with ease. Perhaps the biggest factor in its favour (after the impressive bundled sounds and instruments) is the Mikro’s comprehensive effects section. It features 22 dedicated effects, including all the standard reverbs, delays and choruses, as well as more esoteric algorithms, and the potential for sound warping is huge.

The combination of pads, buttons, a decent LCD screen and a large single encoder means that again, this machine has been designed with jamming and improvisation in mind. It’s also great at looping and can split an audio loop by either transients, musical division or a number of equal parts and distribute it over the pads for instant remixing.

At this price point, the Mikro is a sleek looking and impressive option for live beat making and improvisation, as long as you don’t need a completely stand-alone device.

The availability of well-specced, intuitive sample players at this price point has been a welcome addition to many studios and these three boxes are all strong contenders for your live or home set up. Whilst the consumer will always have to pay to get more functions, each box reviewed undoubtedly has it’s own strengths and charms. Your opinion on the Volca will probably depend on whether you like using a step sequencer or not, although the addition of a little analogue processing might sway you too. The Maschine Mikro has the most functionality and features but requires a computer. The Akai has more features and memory than the Volca, and those Akai filters, but has less audio manipulation options than the Mikro.

For generating new ideas, composition on the fly and fully-fledged live performance, any of these three machines would provide you with plenty of opportunities to jam with your favourite samples and assist you in easily coming up with fresh ideas, and maybe even a chart-topping banger!