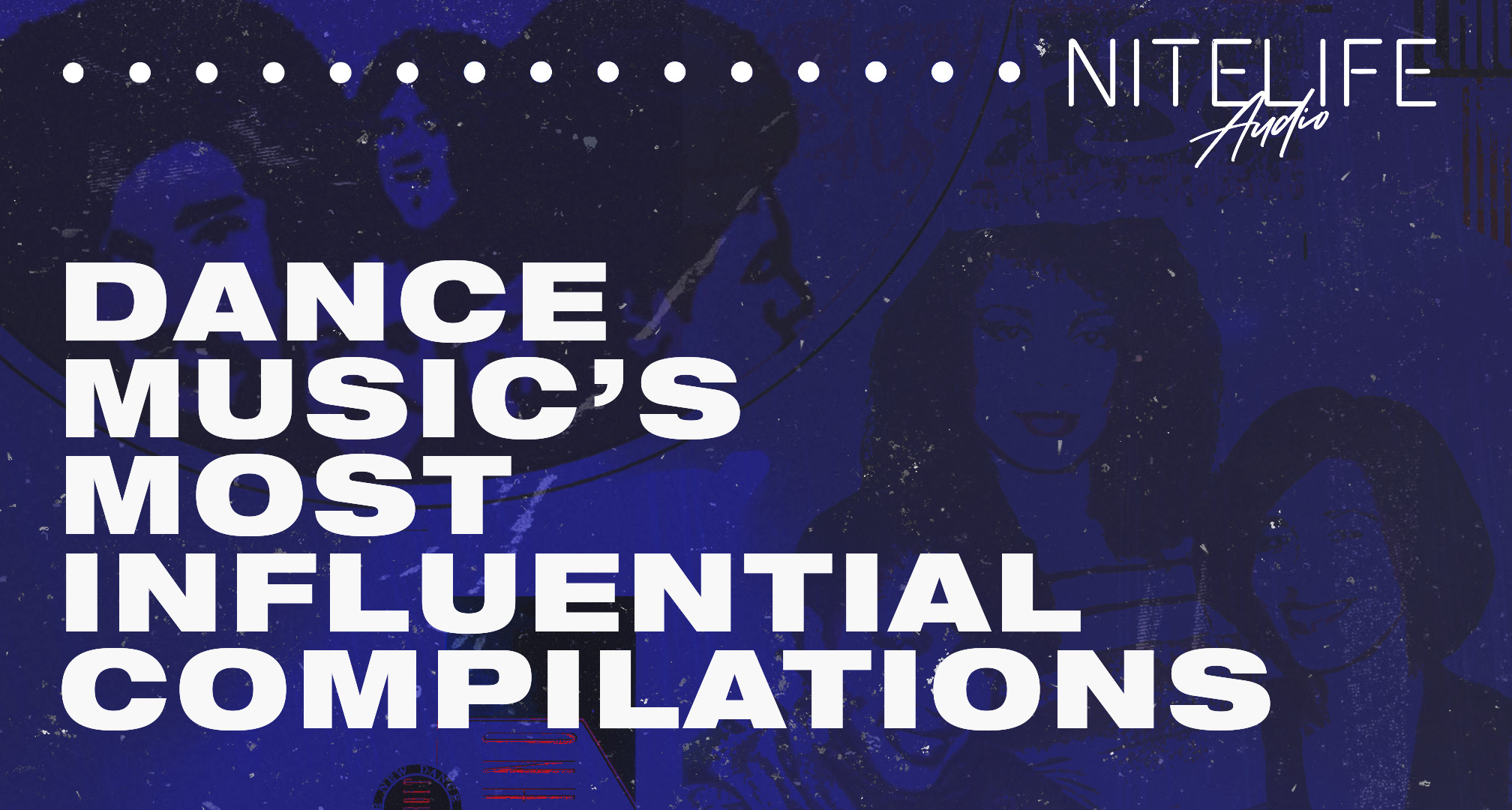 The compilation album, as distinct from the DJ mix album, has a mixed reputation among the DJ and dance music community. Some DJs view them as a cheap way into the underground for amateurs, while others resent the sudden availability of tunes that they may have spent small fortunes collecting. But for many, the humble compilation is a treasured part of our shared dance music history.

Some comps function as brilliant introductions to new scenes or long-forgotten tunes, allowing wider access to musical treasures previously only available to collectors. Then there are the compilations that define a scene or codify a genre. Some compilations are nothing more than a record company’s attempt to quickly capitalise on a club scene, some are sparkling snapshots of an underground movement about to go global – indeed, a good compilation can be both these things simultaneously.

Opinions will inevitably differ, and you’ll no doubt have your own favourites on which were the most influential compilations, but we’ve picked six that either at the time or looking back, had a major impact on the dance music world.

Set up by entrepreneur Morgan Khan, UK label Street Sounds’ initial release was in 1982, Street Sounds 1, a legendary collection which set the tone for their early 80s compilations: the latest upfront 12” mixes of underground disco and jazz-funk, all on a single, affordable album. The Street Sounds comps gave soul fans access to music that was rarely heard on UK radio and that for most would have been too expensive if they had to be bought on import 12” vinyl.

Street Sounds followed up their first edition with Electro 1, the first in a series of groundbreaking Electro compilations and the soundtrack to countless break dancing battles in UK town centres and parks.

The Street Sounds and the Street Sounds Electro compilations played a huge role in British dance music culture, with countless UK DJs, producers, promoters, record dealers, radio presenters and clubbers all citing them as their first encounter with underground dance music. Electro 1 deserves a special mention here as it’s arguably the most influential in terms of breaking previously underground music to the masses, but it was actually mixed (by DJ Mastermind Herbie) so counts as a mix rather than compilation album. Instead, we’re going to opt for Street Sounds Edition 1 which featured a clutch of quality recordings including the Peach Boy’s seminal ‘Don’t Make Me Wait’, Raw Silk’s killer ‘Do It To The Music’ and the pure joy of Leroy Burgess and Jocelyn Brown on Inner Life’s ‘Moment of My Life’, all records that influenced house music in various ways.

In the late 80s, various major record labels finally realised that London’s rare groove scene had been bootlegging much of their obscure back catalogues. Labels like RCA, Charley and Polydor all rushed out rare groove compilations, featuring some of the very finest rare soul and funk tracks. James Brown’s Funky People 1 is, as its name suggests, a collection of James Brown’s side-men and vocalists, produced by himself from his hottest early 70s period. By the time most of these comps hit the streets (1987,88), the rare groove scene in London had already peaked but they unleashed on the public a set of unique records, many of which would become essential building blocks of entire genres.

Which is why out of all the rare groove compilations from the late 80s, we’re choosing James Brown’s Funky People 1 from 1986 as it contains the ‘Think’ break (from Lyn Collin’s ‘Think (About It)’) which would go on to be rinsed time and again in hip hop, house, techno, jungle and drum & bass. The album also includes a suite of monster-funk tracks from The J.B.s, Fred Wesley, Lyn Collins and Maceo & The Macks. Samples of James Brown’s band as showcased on this compilation soundtracked some of the finest hip hop of the late 80s as well as providing much of the rhythmic propulsion behind UK hardcore, jungle and drum & bass.

From the same year as James Brown’s Funky People but looking in the entirely opposite direction, The House Sound of Chicago had a huge impact on UK music fans. For many, this was the first time house music had appeared together, presented as a movement. Marshall Jefferson’s ‘Move Your Body (The House Music Anthem)’ for example, had appeared on the ‘Upfront 3’ compilation the same year, but together with street soul like Loose Ends and T.C. Curtis and hip hop from UTFO and Ultra Magnetic M.C.’s.

The House Sound of Chicago gathered together some of the best in Chicago house from the previous few years, clearly defining the new sound. Featuring the heavy 4/4 drum-machine beats, rolling robotic b-lines, deep synth washes and soul-influenced vocals of mid/late 80s Trax Records, The House Sound of Chicago also included a couple of huge crossover hits. Farley Jackmaster Funk featuring Daryl Pandy’s ‘Love Can’t Turn Around’ had got to #10 in the UK charts in July ’86 while Steve Silk Hurley’s ‘Jack Your Body’ would reach #1 in January ’87.

According to legend and indeed Dan Sicko in ‘Techno Rebels’ and Bill Brewster & Frank Tope in ‘Last Night A DJ Saved My Life’, this compilation was originally going to be called The House Sound of Detroit. The last-minute inclusion of Juan Atkin’s ‘Techno Music’ led UK A&R and compiler Neil Rushton to rename it Techno. On hearing ‘Techno Music’, “Rushton was instantly prompted to change the compilation’s title to Techno! The New Dance Sound of Detroit. Just like that, the name for Detroit’s dance music was born, setting it apart from house and defining it as a new musical genre in its own right.” (p.68 Techno Rebels Dan Sicko)

The compilation made clear the differences between the electronic music of both cities. There were less vocal tracks on the Detroit compilation than on the The House Sound of Chicago and the connection to the gospel and soul vocal tradition was less prominent. ‘Traditional’ vocal performances had largely been replaced (excepting Inner City’s Big Fun and Members Of The House’s ‘Share This House’) with spoken words, vocodered and effected vocal snippets or rejected entirely in favour of pure machine music, giving the collection a more futuristic feel. And although there were clear similarities between the Chicago and Detroit sound, the lack of songs had by necessity also produced a broader range of synth sounds on the techno compilation than on its Chicago counterpart.

For early embracers of techno in the UK, this album was literally, the future.

Released in the summer of 1992, Warp’s Artificial Intelligence definitely had an impact on dance music and was a key compilation in giving electronic music credibility as an art form relevant away from the club environment.

The Artificial Intelligence roll call of artists was made up of what writer Simon Reynolds called “a loose international network of anti-rave dissidents” (Generation Ecstasy p.183), reacting against the perceived dubious extremes of UK hardcore. At the time, the UK hardcore rave scene which had briefly flowered so beautifully was going through a difficult adolescence of increasing tempos and spiralling drug-use – prior to it eventually emerging triumphant as jungle then drum & bass just a year or two in the future.

The music on Artificial Intelligence, the cover photo of a robot chilling out listening to records, the album name and its subtitle – ‘Electronic Listening Music From Warp’ – together with its serious sleeve notes, all went some way to defining the aesthetic of what becomes known as ‘Intelligent Dance Music’ – IDM. Musically it also codified a set of production tropes: a certain BPM range, minor chord pad washes and subtle acid flecks with plenty of nods to the austere and stately end of Detroit techno.

It introduced many listeners to Aphex Twin (as Dice Man) and Richie Hawtin, included Speedy J’s elegiac ‘De Orbit’ and an appearance from The Orb’s Dr Alex Patterson with a live version of their ‘A Huge Ever Growing Pulsating Brain…’ called ‘Loving You Live’: in other words, it’s still a captivating listen today.

Before ‘chillax’ was a word, before ‘chill out’ music became codified into Spotify playlists of bland pads, beige plucked acoustic guitars and vaguely ethnic flavoured percussion, there was this sublime collection of downtempo music. Compiled by Café Del Mar resident DJ Jose Padilla, the album collected releases from dance music artists like A Man Called Adam, Underworld, Leftfield and Sabres of Paradise and matched them with music from beyond the dance floor like the Penguin Cafe Orchestra and Padilla himself. In doing so, Cafe Del Mar – Ibiza provided a snapshot of the emerging chill out genre. It was an album that would go onto soundtrack many post-rave come-down journeys back to normality, with stand out tracks including Sabres of Paradise emotive ‘Smokebelch II’ and AMCA’s gorgeous ‘Estelle’.