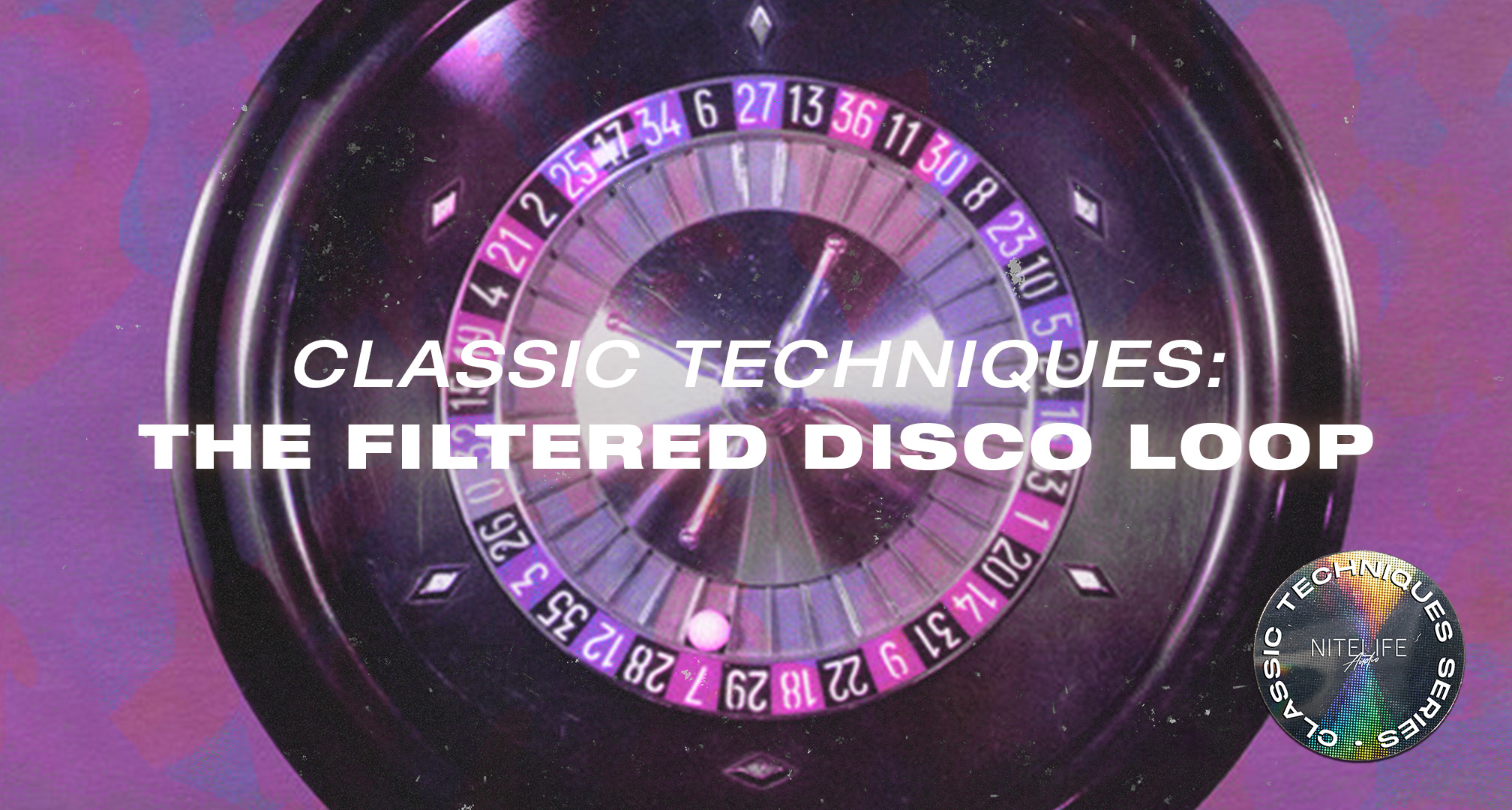 We take a closer look at one of the simplest yet most effective sampling techniques to have emerged from dance music: the filtered disco loop.

Filters have long been revered by electronic music producers. Although they were originally designed as tone controls to address particular sonic problems, dance music producers came along and misused filters in ways that took them far from their intended purpose. It was Chicago producer DJ Pierre who first bought the squelchy delights of a decent filter to the attention of other beatmakers. His tweaking of the filter cut off and resonance controls on his Roland 303 on 1987’s ‘Acid Trax’ by Phuture created the new genre of acid house and filters have been used extensively in dance music ever since. Although the very first samplers had no synthesis functions at all, it didn’t take long for manufacturers to begin making samplers with filters, envelopes and LFOs, bringing a whole new suite of sonic possibilities to working with samples.

The filtered disco loop is a technique that has been used countless times in dance music and which never fails to work on a packed dance floor. You can hear it used in Pete Heller’s ‘Big Love’, Stardust’s ‘Music Sounds Better With You’ or Pepe Braddock’s sublime ‘Deep Burnt’. Essentially, this technique takes a sample loop and then puts it through a low pass filter. The audio then sounds muffled, with no top and very little mid-range, as though you’re listening to it through a wall while it’s being played at a house party next door. Then slowly the filter opens up to gradually reveal the rest of the frequencies. Careful manipulation of the filter on a track can tease and tantalise a crowd before delivering a knock-out blow. It’s a simple but brilliant technique that has destroyed dance floors for years, largely because it is a hugely effective way of building and then releasing tension in a song. The use of the filter to tease an audience with a disco loop was so popular, it became the basis of an entire genre, in the shape of French house.

To get this technique working in your tracks, you’ll need to understand what filters do. Although they perform a similar role to EQ in that both adjust the tone, filters work in a different way. EQ boosts or reduces a range of frequencies, filters let audio above a certain frequency pass whilst attenuating anything outside those limits. So a filter doesn’t just either boost or cut a particular frequency like an EQ, it entirely removes all the frequencies below or above a certain limit. It’s the changing of this limit – the moving of the cutoff frequency by the producer during a filter sweep – that provide the characteristic sound of this technique. There are a few different types of filters, but here we’re going to be looking at the low pass filter, which, as it name suggests, lets the low frequencies pass whilst attenuating the rest of the frequency spectrum.

One of the key things to consider when using filters in your productions is the slope of the filter. The slope refers to how – either gently or sharply – the filter cuts off the frequencies and is measured in decibels per octave (‘dB octave’). The filter slope determines the reduction of signals outside the ‘pass’ frequency and gives a filter its particular sonic character. Generally, this slope will range from 12dB to 24dB per octave. If a 12dB filter is set to 100Hz, then any audio an octave below that at 50Hz will be reduced by 12dB, and any audio an octave below that at 25Hz would be reduced by 24dB and so on.

For the purposes of making a looped disco sample into a fat pumping dancefloor destroyer, all we really need to know is that the steeper the slope, the more pronounced the effect of the filter and, when used in tandem with higher resonance settings, the more intense the ‘squelch’ effect of the filter. Essentially you would use a lower slope for gentle tonal shaping, and a higher slope for performing an ‘in your face’ filter sweep.

Your DAW will have a number of filter types available and there are plenty of decent filter plug-ins on the market, but in Logic and Ableton the auto filter defaults to a 24db low pass and in Reason, the ECF-24 standard filter is a 12db low pass. In Ableton Live you can drag an Auto Filter from the effects onto the sample you want to filter. In Logic, you can select the track you want to filter, re-route the audio to an empty bus and add the AutoFilter to the track that Logic will create. In Reason, you can just right click on the instrument you want to filter and add a filter unit from the menu.

If you’re after the true sound of French filtered house, you like the tactile interaction of physically tweaking the controls, and you’re feeling particularly flush with cash (or maybe you just hate money and you want less of it), then you could invest in one of the genuine filter units used by Daft Punk and their peers. Your choices are; The Mutator, made by Mutronics,  based on technology originally developed for analogue synthesis in the 60s and which was the go-to stereo analog filter and envelope follower for many of the bands and musicians who shaped the 90s sound.

Another option is the MFC42, a true analog filter module designed by Akai for their MPC-series gear. You can use it to process any sound source since it has basic 1/4″ inputs and outputs and MIDI. It has genuine analog filters for that warmer tone with Lowpass, Highpass, Bandpass, and Notch filter types. You can find them on eBay from time to time for a price that isn’t too crazy (around £800) and they really do have a wonderful sound which instantly transports you back to the squelchy funk of the filter-disco-loop era.

Unfortunately, in the case of The Mutator, an important component was discontinued by the manufacturer which effectively killed production. Since then, it’s became very much a collector’s piece, and the only way artists/engineers can get their hands on it is via auctions or eBay. We’ve seen some go for as high as an eye-watering £2800. There is a Softube plug-in version, although as we haven’t tested it we couldn’t definitively say whether it’s an accurate recreation, but Softube overall are an excellent developer so there’s a good chance it’s very close.

In terms of what you’re applying the filter to, you may want to process the entire track, an individual sample, or a group of samples. Some producers leave a hat or a clap unfiltered to hold the rhythm together and some leave the kick outside the filter sweep so that all the low-end energy doesn’t get over-amplified during the sweep. Other tracks feature filter sweeps where every single part is filtered – it’s a creative decision, depending on how you want your tune to sound and what effect you’re aiming for.

If you’re going to filter the entire song rather than just individual samples, in Ableton you can simply drag a filter onto the main outputs, and in Reason you can right-click on the hardware interface unit and drop a filter straight onto it. In Logic, you’d just select all the parts, re-route to an empty bus and add the filter there. Alternatively, you can use Logic’s ‘summing stack’ command. The Autofilter in Logic allows you to adjust the level of dry and wet signal and for this technique, you need to have the signal entirely wet. LIVE and Logic’s auto filters should default to 100% wet, and Reason’s ECF has no dry/wet controls at all.

Cutoff And Resonance: A Deadly Duo

Once you’ve got your filter in place (and you’ve remortgaged your house for the Mutator), you’re ready to get tweaking. Moving the cut off control anti-clockwise will slowly reduce more and more of the top and then middle frequencies until you’re just left with the lows and that characteristic muffled effect. Turn the control completely to the left and the sound will disappear entirely. Now you can start to increase the resonance whilst sweeping and you should start to hear some serious squelching as the filter moves through the frequencies. This is caused by the resonance control adding a little boost to the frequencies just above the cut off point. It might be tempting to simply turn the resonance up high but you have to beware – high levels of resonance can provoke extremely loud volume peaks as you perform your sweep.

This is a genuine health and safety issue if you’re working on headphones, and can also cause you to shred your monitors if you’re not careful, so we would strongly advise caution at this stage. We would also recommend using a compressor to reign in the inevitable peaks, and maybe also try adjusting the resonance up and down manually as you sweep the cut off to maintain a more even volume level. Depending on the audio material and the behaviour of the particular filter you’re using, you may also find that you need to turn the resonance down once the filter is fully open to avoid a drop in volume or an over-sizzled sample. In many cases, it works well to automate the resonance along with the cutoff for maximum character and vibe. It can also help your record to feel a lot more human and ‘Alive.’ That was a Daft Punk reference, in case you missed it.

The trick is to use the filter to give little glimpses of the sample and to hint at its existence to build tension. You can do this with smooth sweeps or experiment with more radical tweaks – experimentation is half the fun. The cutoff and resonance controls are a gateway into hours of filtering and squelching and can be a key part of a live performance too. It’s such an effective technique that entire records have been built around nothing more than a filtered disco loop and a beat. Hell, some artists have built an entire career from a beat and clever filtering of a choice groove. However, while sampling chunks of old disco records might have been the route to filter-house success in the past, major record labels now have entire departments dedicated to tracking down copyright infringements. Luckily, there are now enough high-quality royalty-free sounds on the market for producers to be able to build their own disco-style loops using drum loops and individual instruments. All you need are some keys, a guitar lick, some bass, and perhaps some strings and/or brass which you can ‘mix down’ or bounce in place to create a stereo file. From there you can add some tape saturation, vinyl crackle, and any other lo-fi style processing that your heart desires, in order to get closer to that ripped-from-your-record-collection feel. You can then resample it again, and filter it to your heart’s content. That way, you get to keep all the royalties and publishing when your filter-disco-house track goes global next summer.